George Bolzoni has always been passionate about sports, both as an athlete and as a spectator. 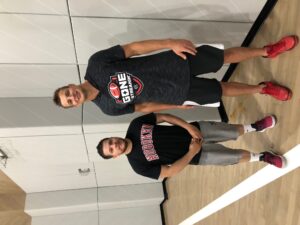 As someone interested in the fitness industry, George Bolzoni naturally grew a passion towards sports. From his childhood and throughout his high school and college years, he was very active in a variety of activities. Some of his favorite sports to play included soccer and basketball. Even now after college, George still enjoys playing in local recreational and community leagues and sports programs. It is a great way to stay involved in the community while also staying fit and challenging oneself.

When he is not participating in sports himself, George Bolzoni enjoys getting involved with fantasy sports leagues and following along with the histories and current happenings of the four major sports: football, basketball, hockey, and baseball.

As a football and NFL fan, George is an avid supporter of the Dallas Cowboys. He loves cheering on “America’s Team” and watching exciting rivalry games each season. Some of his favorite hall of famers from the Cowboys include: Tony Dorsett, Deion Sanders, Michael Irvin, and Emmitt Smith.

George Bolzoni loves all things basketball. While he doesn’t really have a favorite team, he enjoys watching the careers of many mainstream players and rooting for the underdogs. Some of his favorite players to watch have included Steve Nash and his favorite point guard of all time, Danilo Gallinari. George also enjoys watching college basketball especially during March Madness. His favorite college team is the Gonzaga Bulldogs.

For George Bolzoni, there is almost nothing better than playoff hockey. Every year he looks forward to the series and supporting his favorite NHL team, the  Rangers. Their most recent Stanley Cup Championship occurred in 1994. George is hopeful for another championship season in the upcoming years.

America’s favorite pastime, baseball was introduced to George Bolzoni during the mid 90s through the Yankees. These were the days of Derek Jeter and Bernie Williams along with other greats that led the Yankees to multiple championships.