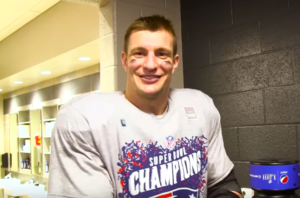 Well, there you have it!  Gronk now has four Super Bowl championships on his career record.  As a New England Patriot, he played in (and won!) Super Bowl XLIX, LI and LII.  And now, as a Tampa Bay Buccaneer, the legendary tight end has also earned a ring from Super Bowl LV.

Sunday’s win fits in nicely to Gronk’s list of career highlights, which also include four First Team All-Pro selections and being selected in the NFL 2010s All-Decade and NFL 100th Anniversary All-Time Teams.